To get Caught up on this now multi-year build, check out the two previous posts here:
Part 1 (ouch, I estimated this would be done for Wondercon ’18, oops)
Part 2

I last updated this project… I think in February of 2019. I do my best costume work in the two month crunch before the event the costume is for, and since this was for Celebration Anahiem 2020, I thought I had a bit of time to work on it. 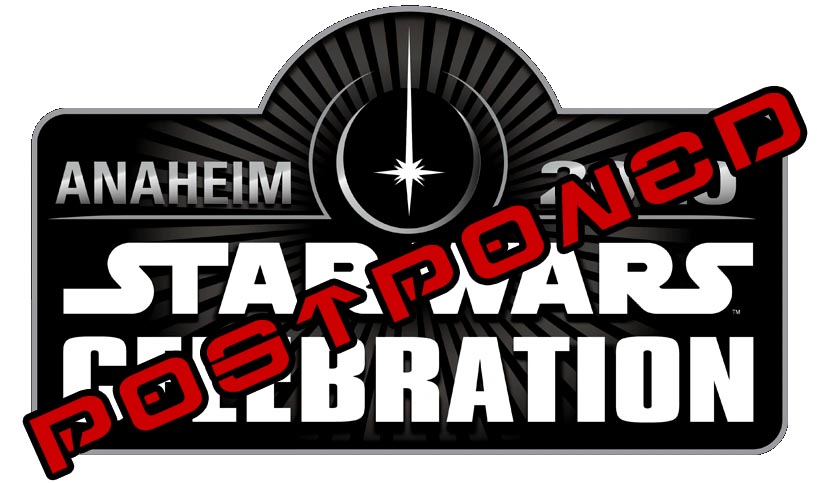 Turns out I have/had more.

So what has changed/been done in the year since I started this? Well, we started over completely. The original flight suit I made was crafted from a slightly thin and kinda stretchy fabric. It was remnants of the fabric I used for my Flight Crew uniform and was definitely more of  a “Fashion” fabric than the “Utility” material that would be more appropriate. As a flight suit, this material didn’t feel right, too soft, if you will. It also didn’t help that I had three problems:

So I threw it out (metaphorically, it’s still in my closet) and started anew, but this time I cheated a bit.

Back to the Drawing Board

About the time we decided to start over, the current costume license holder for Star Wars, Anovos, had a obnoxiously good sale on their AT-AT Driver Jumpsuit. I think I got it for around $30 (normally $165).  What’s great about this suit is that it basically is the X-wing flight suit, but grey instead of orange. It’s a fantastic ‘screen accurate’ way to get general measurements of the pockets and seams for the Star Tours one we’re making. This one I actually for myself (for an At-St Driver outfit), so it’s one size smaller than what the Star Tours one will be. 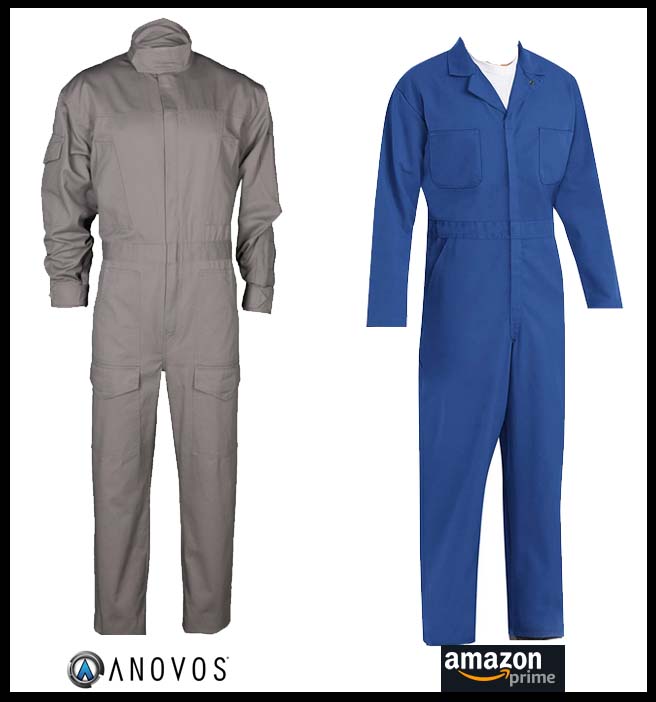 I picked up the blue jumpsuit for pretty cheap on Amazon,  but, more importantly, it came in a real nice shade of blue. It also helped that it was a very basic set up without a ton of pockets or extra seams that I would need to modify. So with a new base for the costume, let’s revisit a familiar image:

Here is the basic idea we are starting with. Similar to the old version, just “color-inverted”. At the moment, we are leaning towards an A-Wing helmet as the base for a tech helmet, we are still going over options for vest/tool holder. 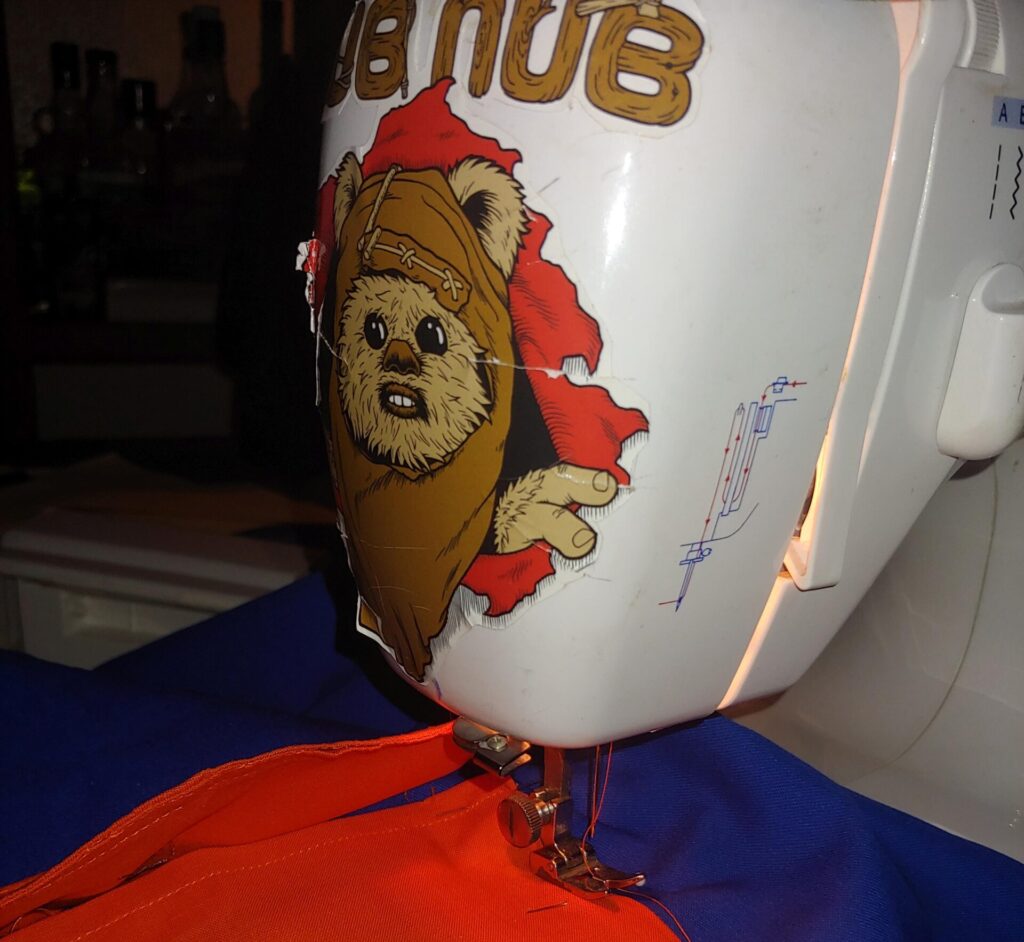 Since the jumpsuit I’m using is, well, already made, there are a few customization I have to add. First of these is creating fake seams on the chest (the Dark Blue lines) then create the pockets (orange) which I will do a little later.

On the ‘real’ suit, the chest seams are created by overlapping fabric. I’m not gonna replicate that so I made fake seams. I did this by removing the blue ‘belt’ (that will be replaced by an orange one) and using that extra fabric to create x3, 1/2 inch wide strips of fabric.

If you take a look at the image to the right, you will see where I attached the ‘seams’. Pretty easy to do, just a simple top-stitch. Up close its pretty obvious what I did, but far enough away it looks…close enough to ‘screen accurate. 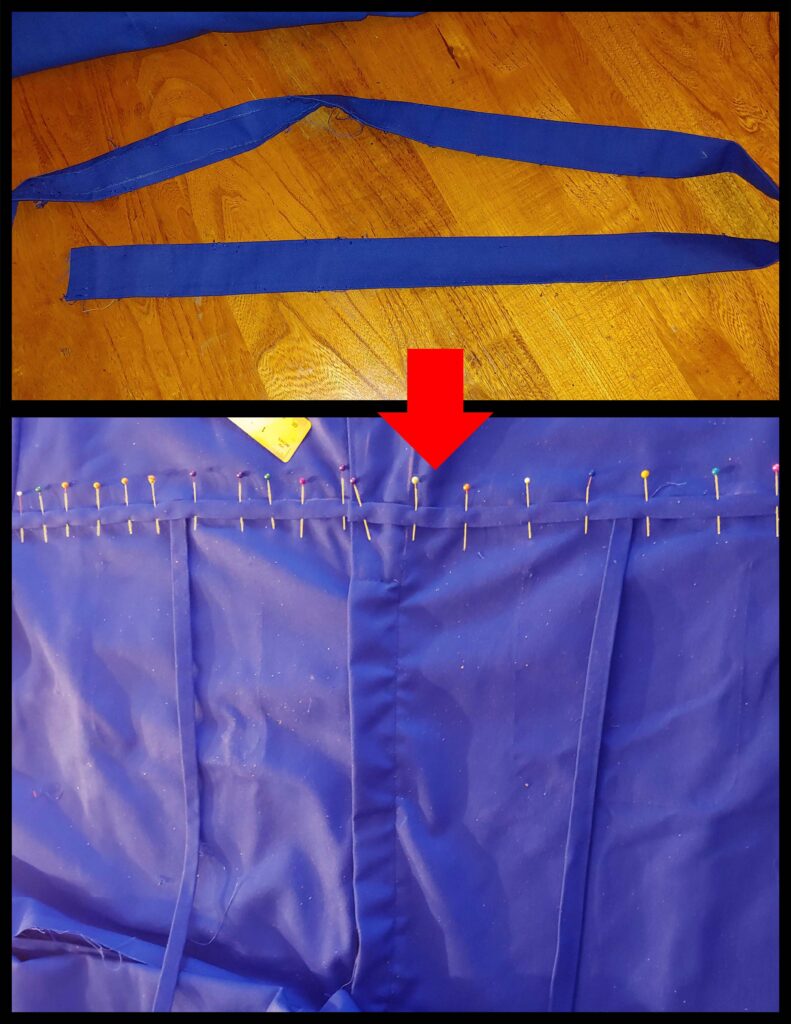 Usually, I’d post a picture here of how that turned out, but at the moment of typing this, it looks bad close up. Up close the stitching is not straight and I’m going to re-do it at some point. So let’s just move on.

As mentioned earlier, having the Anovos jumpsuit was really helpful. Unlike with Version 1 of this suit, I didn’t have to guess the dimensions of the pockets. I could measure the Anovos ones and extrapolate a scaled up pattern.

It was a pretty straight forward process: 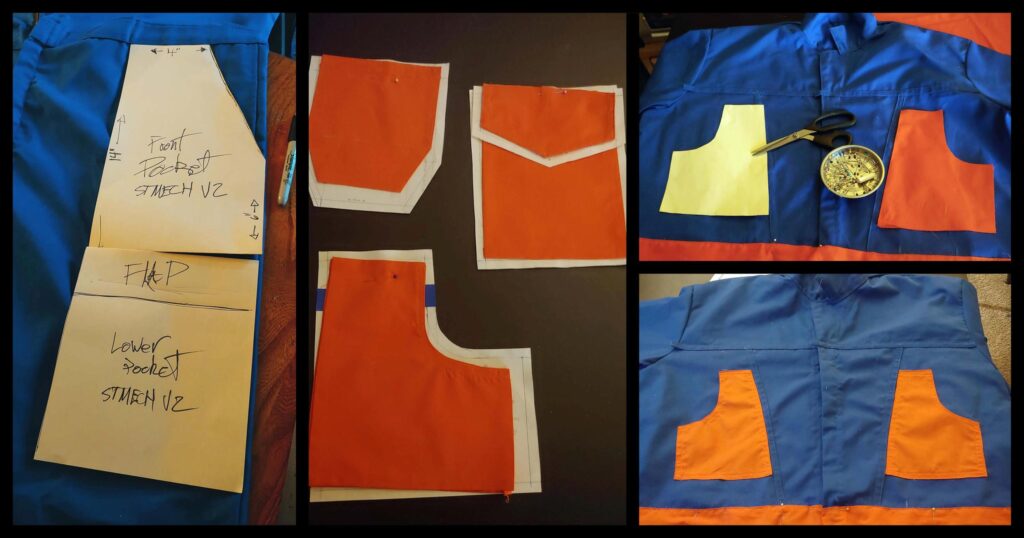 The Sleeve pockets were a bit of trick though. Due to the “Already Constructed” nature of the jumpsuit, I needed to rip out a lot of the per-existing seams so that I would be able to sew on the pockets.

On a weird side note, the ‘Compad’ pocket on the lower sleeve is really really small on the the Anovos flight suit. The open part of the pocket is like, 2″x2″. Solely based on the images for the ‘compad’ greeblies available out there, I assumed this was a much larger pocket. 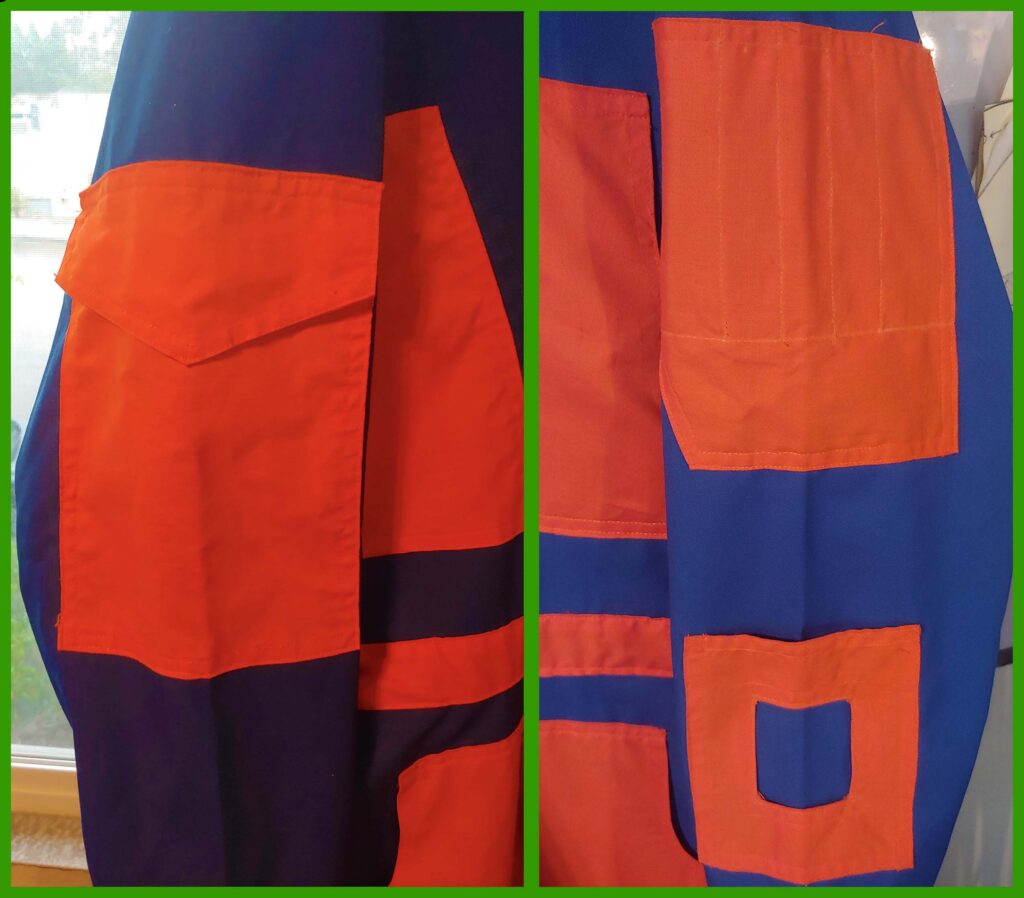 With the pockets sewed on and the Collar and Belt replaced with moar orange versions of themselves, I’m pretty much done with the flight suit. There is a few more small tweeks (re-do the fake seams, apply patches, custom compad etc), but it is 99% done. 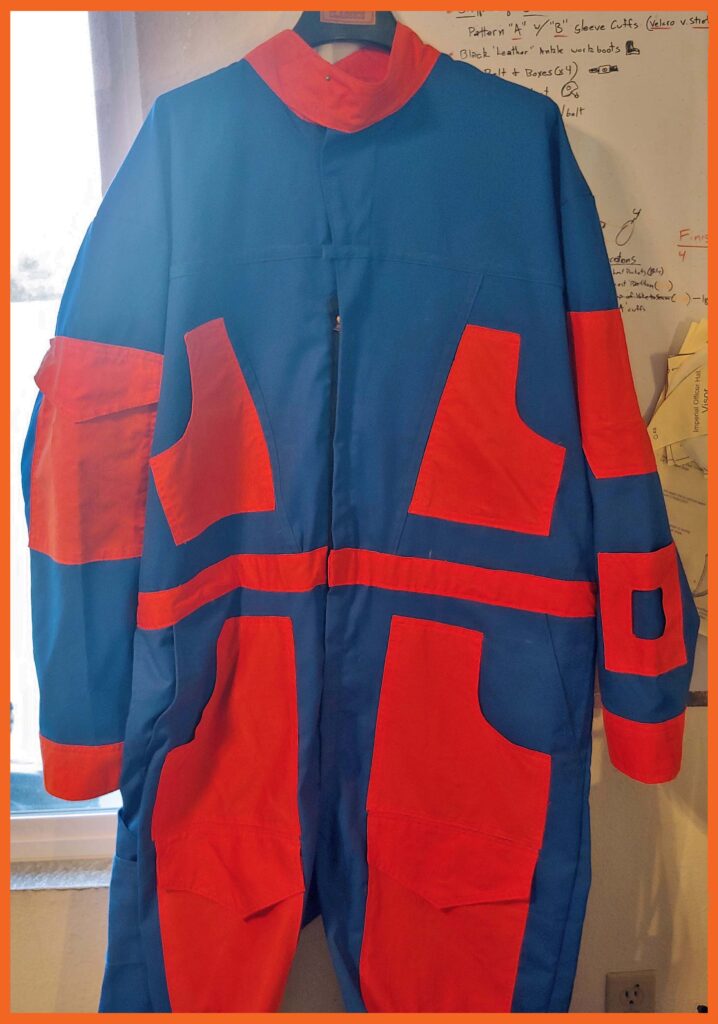 I still feel like it needs something orange on the upper chest, it’s kind of a big, weird, and unbalanced sea of blue up there. It won’t be a huge deal as that area will be mostly covered by a vest/harness type thing.

So now we are left off nearly where we were on the last post about this project. Except this time I didn’t run out of fabric for the sleeves. Next step? Some sort of tool vest. We’ve gone through several different ideas for this part of the costume (see the first post). But, I think we finally settled on something similar to Cassian Andor’s Vest/Disney Smuggler’s Run vests. However I don’t have a pattern for those so I started messing around with Simplicity’s 8480 pattern which is very similar to Jyn Erso’s vest: 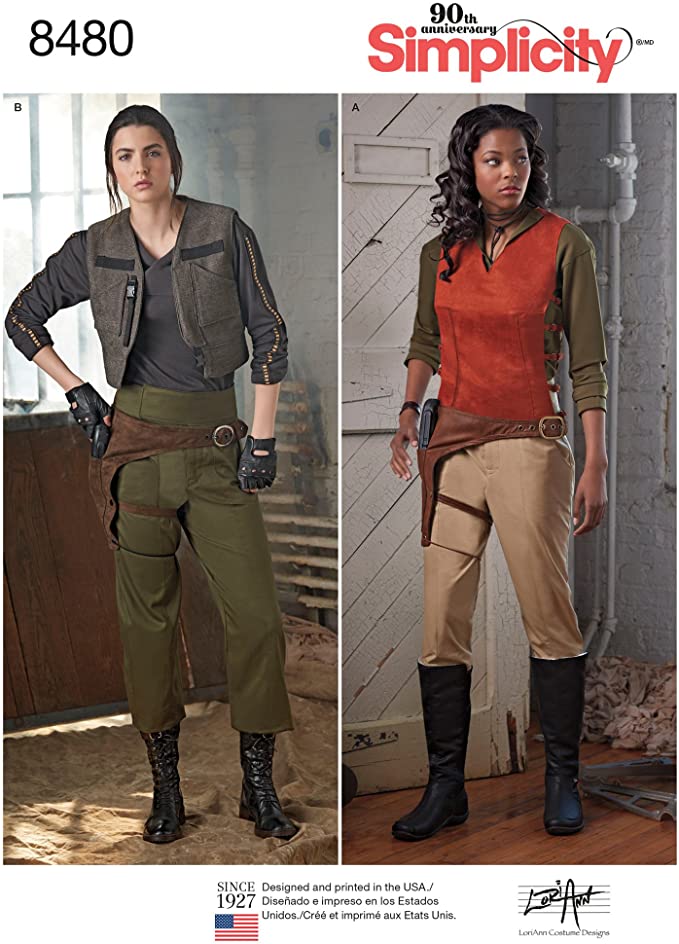 I want it to be a different color than the primary colors of he flight suit, so just for a visual reference, a white/grey and black variant:

Though… the Smugglers Run cast members at Galaxy’s Edge have a pretty cool vest, and it would tie the costume to the Parks just a little bit more.

Things to contemplate for the future.

Due to me getting throughout distracted with my Mudtrooper armor, I did not get around to taking notes on this project as I sped up to knock it out before Celebration.

Main Notes:
– Determined a vest would make the outfit ‘too busy’ and cover up a ton of detail on the flight suit
– Ian found a ‘fall harness’ that was orange and blue hat we hung some pouches off of
– Bodhi Rook style safety goggles were added
– patches added to the sleeves as well as vinyl name tag/unit # in aurebesh added to the chest and sleeve 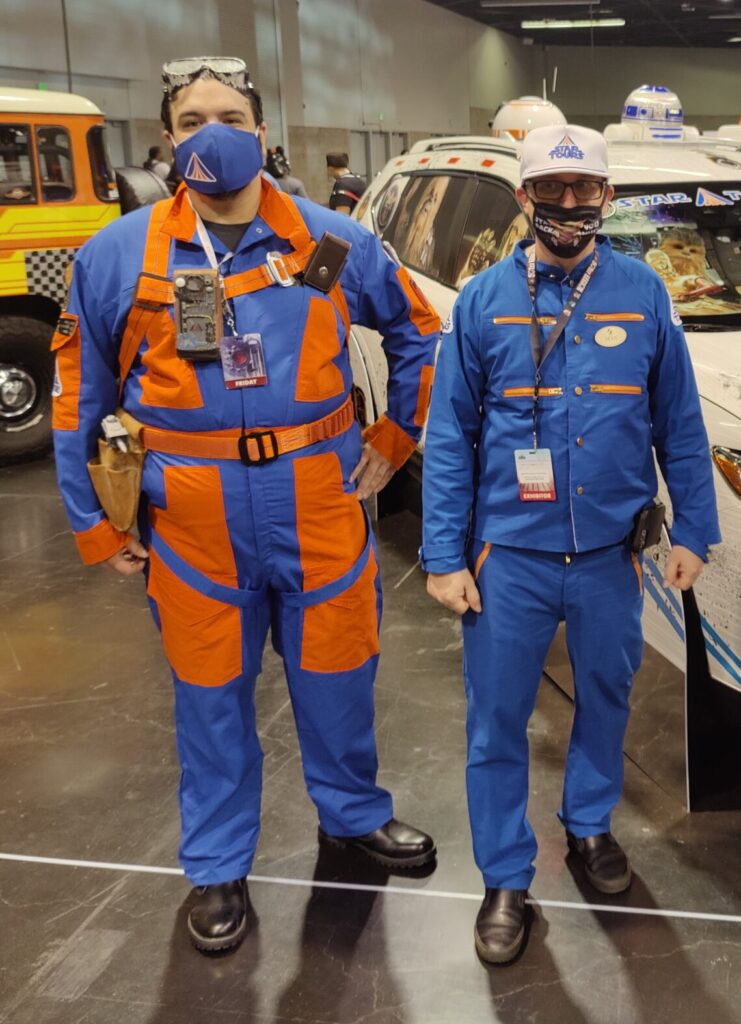 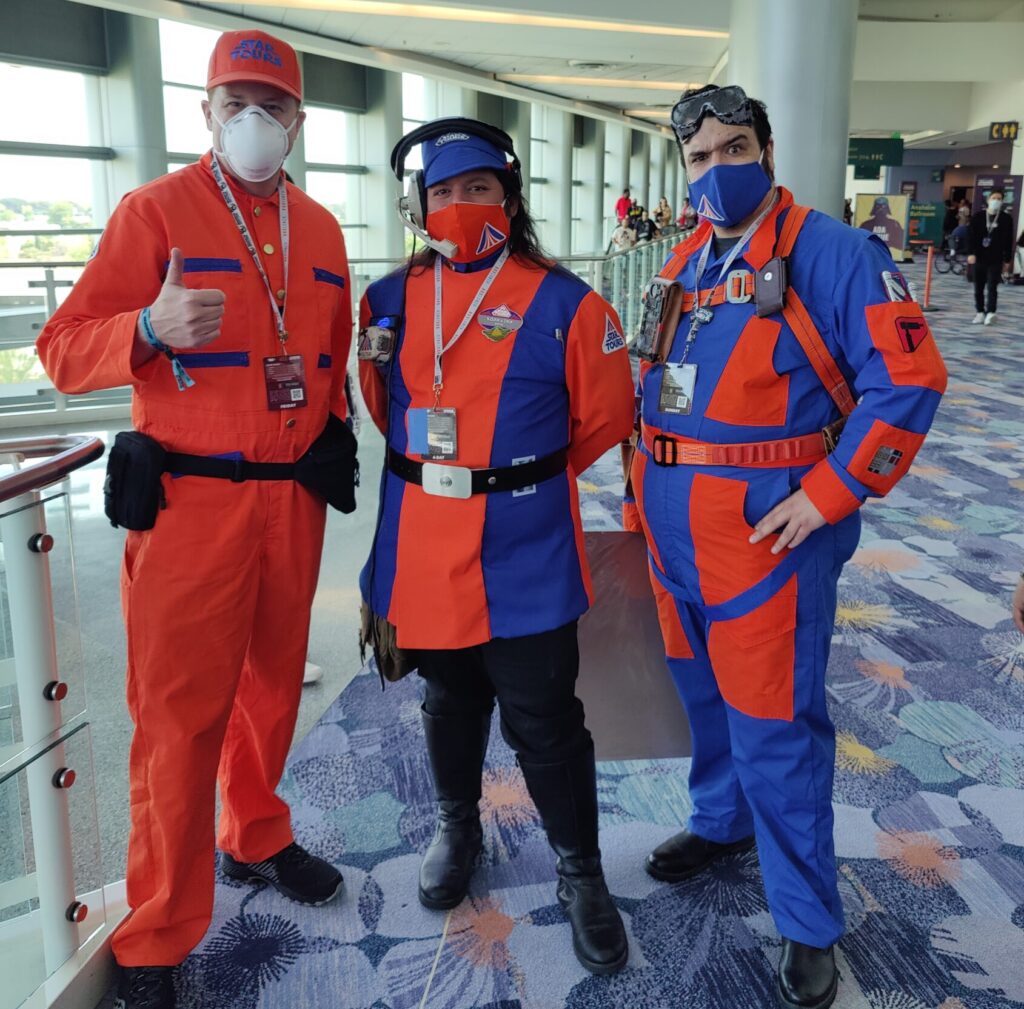 This guy, who’s name I forgot (notice how all of our badges are backwards facing? annoying), But I do believe he runs @Flight_1401 over on Instagram, made the inverted color cast uniform, which ironically is the same jumpsuit base I used for Ian. We met him in line for the Star Tours 35th anniversary panel. 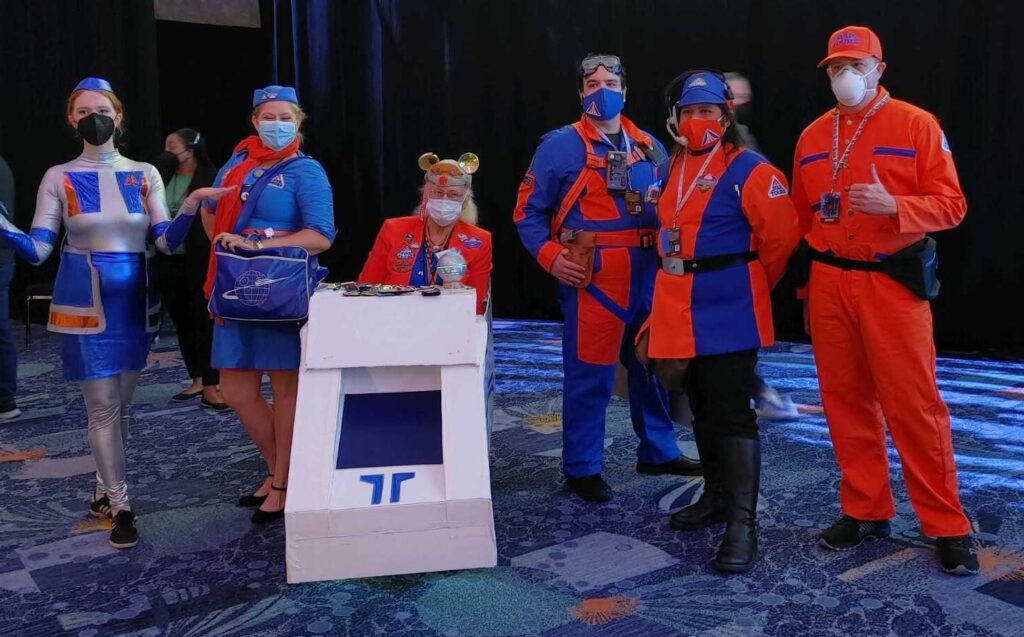 And finally, a group shot of (nearly) all the Star Tours cosplayers at the end of the panel