Ahhh, the Good ‘Ole A280, back bone of the Rebel Alliances ground forces. This particular model of blaster, however, has a bit of a strange history prop wise.

The blaster first appeared in Empire Strikes Back as the main battle rifle of the Echo Base defenders (this blaster was retconned to be the A-295 later). These blasters were based of the WWII German STG-44 assault rifle.

Fast Forward a whole movie and we see the Rebel Infiltrators armed with a slightly different A-280 on Endor in Return of the Jedi. Unlike the A280/295 from ESB with no magazine, in an abundance of wisdom, the prop department over compensated by adding two magazines to the the blaster. These blasters were based off the Armalite AR-15 rifle. 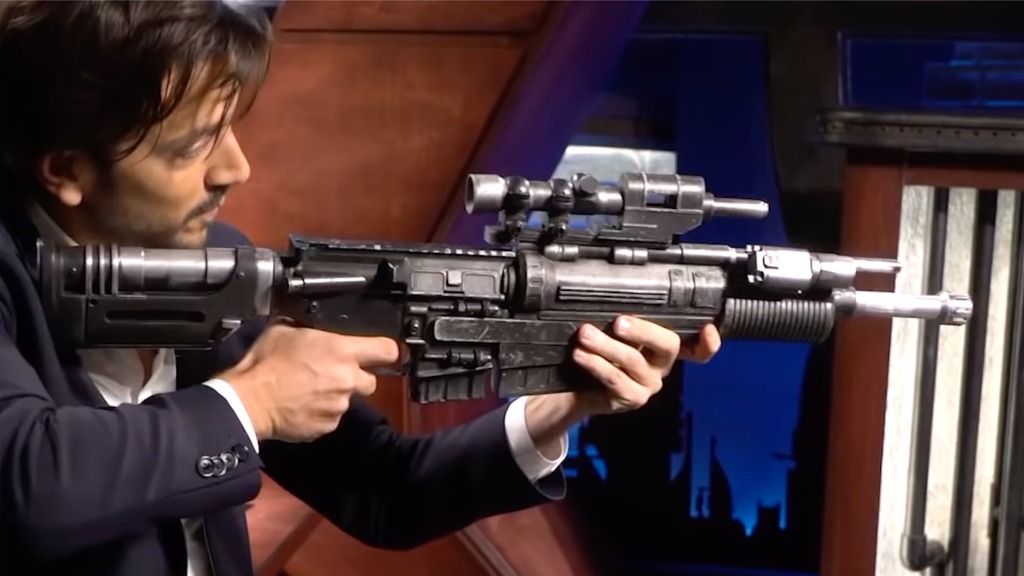 And then we get to Rogue One. Again, slightly different from the previous prop, but still using the AR-15 as a base, but this time with more variants (Pistol, Carbine, Sniper, Convertible Sniper…).

With the news of SDCC being cancelled in early April, I decided to spend some of the funds I had set aside for the Con on something cool, you know instead of $11 personal pan pizzas at one of the Convention Center cafes. Maybe even get it done for Star Wars Celebration (it hadn’t been cancelled yet). Mostly though, I wanted to play airsoft with a working Star Wars Prop (again, see this post about Cosplay Combat).

In April, I ordered a A280-CFE Add On kit from 3D-PropsNL’s Etsy store. The description mentioned that the kit was built around a G&G CM-16 Airsoft Replica and as luck would have it, I have 2 of those in my airsoft arsenal. However, in late May, 3D-Props owner, Eelco Sengers, posted a store update on their Facebook mentioning several reasons for a production slow down (one of which was dedicating their 3D printers to making face masks for healthcare workers!) which pushed out my order a few months, to late July.

This wasn’t much of an issue, especially after Eelco’s Facebook post. As someone that works for a Healthcare company, I would rather see plastic meant for a toy gun being re-purposed to keep healthcare workers safe. Even with the delay, when I reached out with questions about my order, Eelco responded quickly and even gave me a few tips on how to prep/mod my airsoft replica once the kit arrived.

As a quick side note, this will still function as an airsoft gun, but it will be converted to a non-firing mode when I take it to cons (ie, motor and a battery removed fore safety).

“His weapon was in the sniper configuration.”

August 20th. It Has Arrived.

So what all is included in this kit? You may have noticed a missing piece, the pistol. I’ve supplied my own that I’ve been skirmishing with on the airsoft field for about a year now. Other players seem to really enjoy the novelty that I’m using a cut down M4 as my sidearm.

In the next few weeks I’ve got a bit of work to do:

All while making sure it still works as an airsoft gun.

So please check back in a week or two. Let’s see if I can get this thing ready before Celebration 2022!

If you have any questions about the process or really anything in general, leave a comment below. You can also contact me through HothPod@gmail.com.