Are you like me (Jon) and find that playing Battlefront II isn’t enough? Do you analyze the ground battles in the Star Wars films and come up with better infantry tactics that would have led to other outcomes? Does running around dodging 6mm plastic bbs sound like fun? Have you a Rebel Pathfinder costume lying around that you only where a couple of times for Rebel Legion troops or Comic Con?

Well, I’ve got an idea. Let’s combine all those things.

I’ve been playing Paintball/Airsoft for nearly 15 years now. I stopped playing paintball when ‘Speedball’ was  getting popular because I preferred playing in the woods, the more military simulation style of play. Then I found airsoft. It’s the same concept as paintball, but uses smaller projectiles that don’t break or leave a mark. What drew me to this sport was the tendency for players to dress in full army style uniforms and use more realistic looking weapons (it also helps that 2000bbs cost a fraction of a case of paintballs). I’ve noticed as of late that a number of people that are taking the game too seriously. After your fourth or fifth argument with a kid that knows for a fact they shot you with because they have $500 scope on their $1200 high end custom rifle, it stops being as fun. I’ve found that more and more I find myself wanting to do something different, something that will bring the fun back while simultaneously reminding me and others that this is just a game.

So I’m proposing an Star Wars themed airsoft group (an official name will be created later depending on interest. We dress up like Star Wars characters and convert commercially available airsoft guns into blasters and ‘take the piss’ out of the way too serious players.

As mentioned on the Episode 31 of our podcast, a full armor costume (like pictured below) may not be fun to run around in, but the rebels have a ton of costumes that are just soft parts that would work just fine (Endor Pathfinders, Scarif  Marines, Echo Base infantry etc.). But we’ll cover those options at a later date.

Still interested? Good. Probably the hardest part of this idea is getting the blasters together/converted so below I’ve created a master list of available conversion listed by blaster type.
Each entry lists: 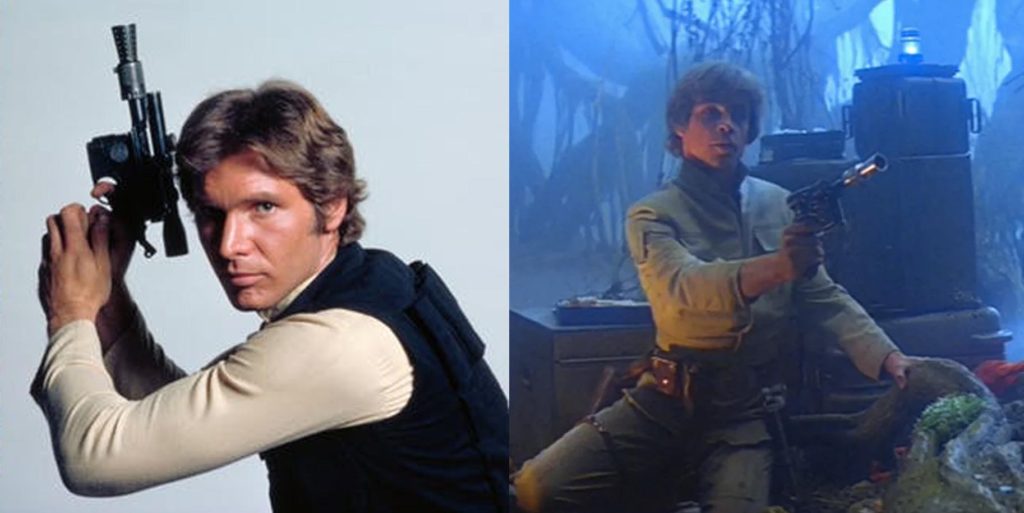 Every scoundrels best friend. Compact and concealable, but powerful enough to punch through Stormtrooper armor. There are several variants of this pistol through out Star Wars. Han Solo has been armed with handful different styles himself. 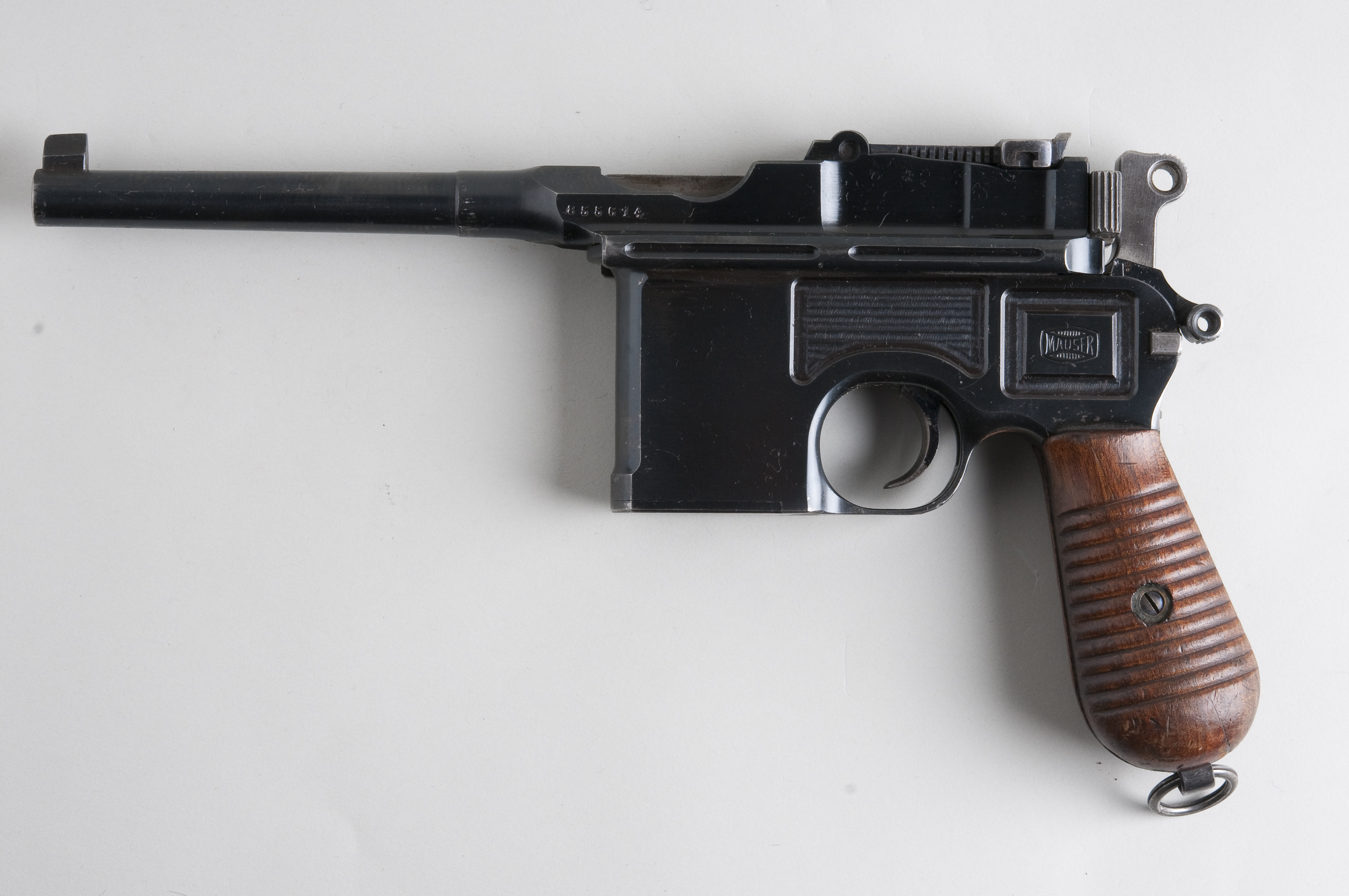 The chosen sidearm of the smugglers and rebels is based on the German made C-96 “Broomhandle” pistol. Originally manufactured in 1896 and used by various military forces well into the next century. To make an airsoft version, you will ave to deal with the magazine extending past the magwell unless you get a custom made C96 replica specifically for the Han Solo build (it is linked below).

The Blaster
*this will be a gas powered airsoft pistol*

WE Tech – Comes with a removable wooden stock/holster

AW Custom – this one costs more, but has been modified to fit the muzzle device a little easier

*I would’ve listed all the individual parts, but I found a number of cheap kits that contain all the parts for each variant*

If you have absolutely no desire to build one. You can buy one! 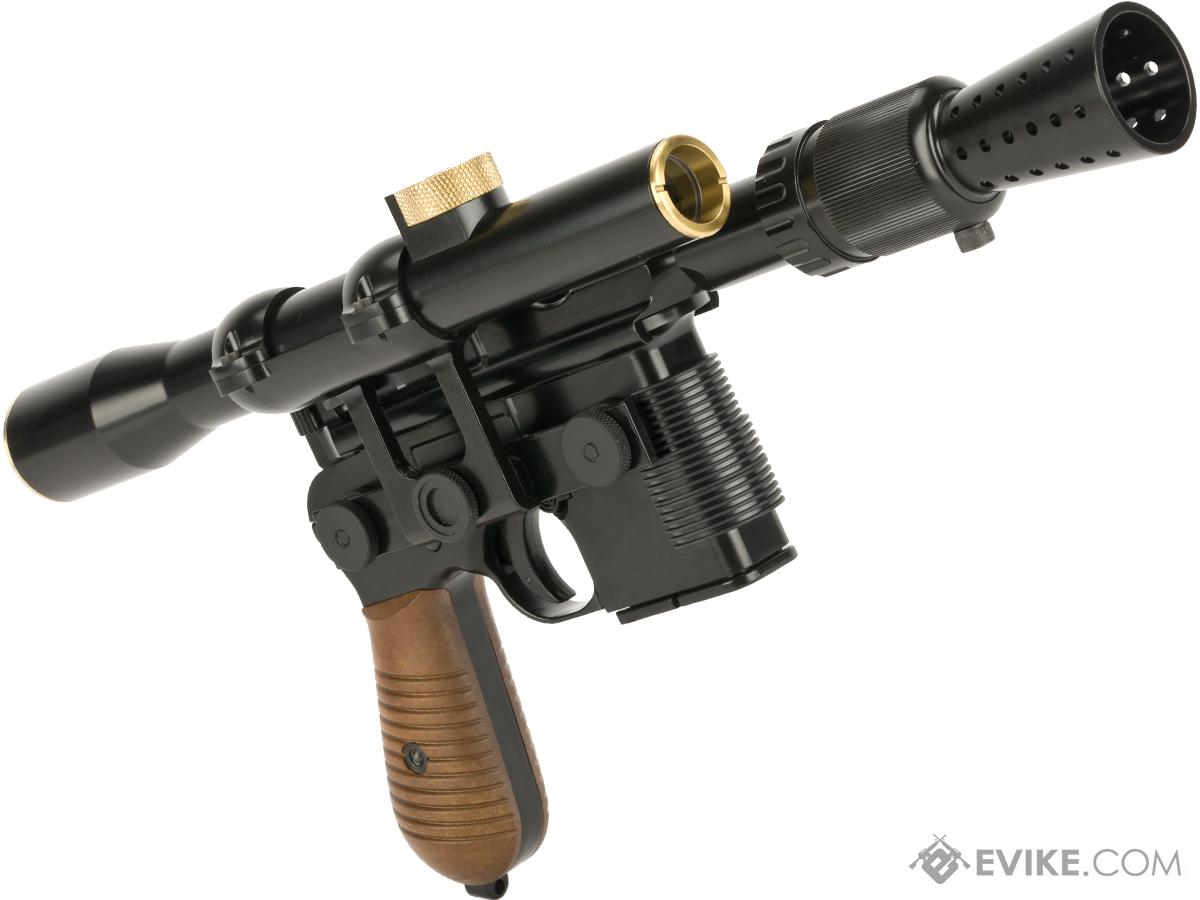 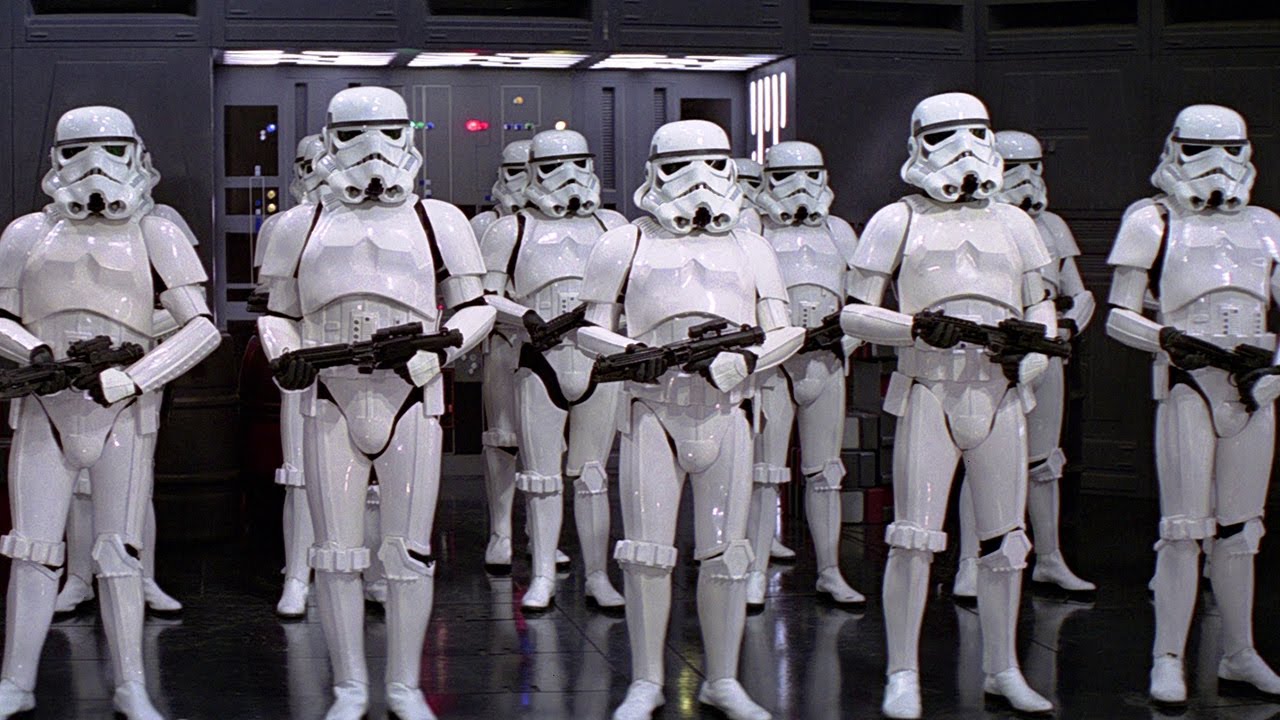 The backbone of the Empire. As symbolic as the US’ M-16 or the Russian AK-47.

S&T Sterling Replica
This is where you would start with an E-11 replica build. The majority of the modifications you will need to do to convert this replica into an E-11 won’t be difficult at all. Mostly glue and a couple screws (but not screwed into the gun itself). The story I heard was that Lucasfilm rented the guns from an armory so all modifications to the guns had to be temporary so they could return them.

What you will need to add to make a basic ANH style E-11: 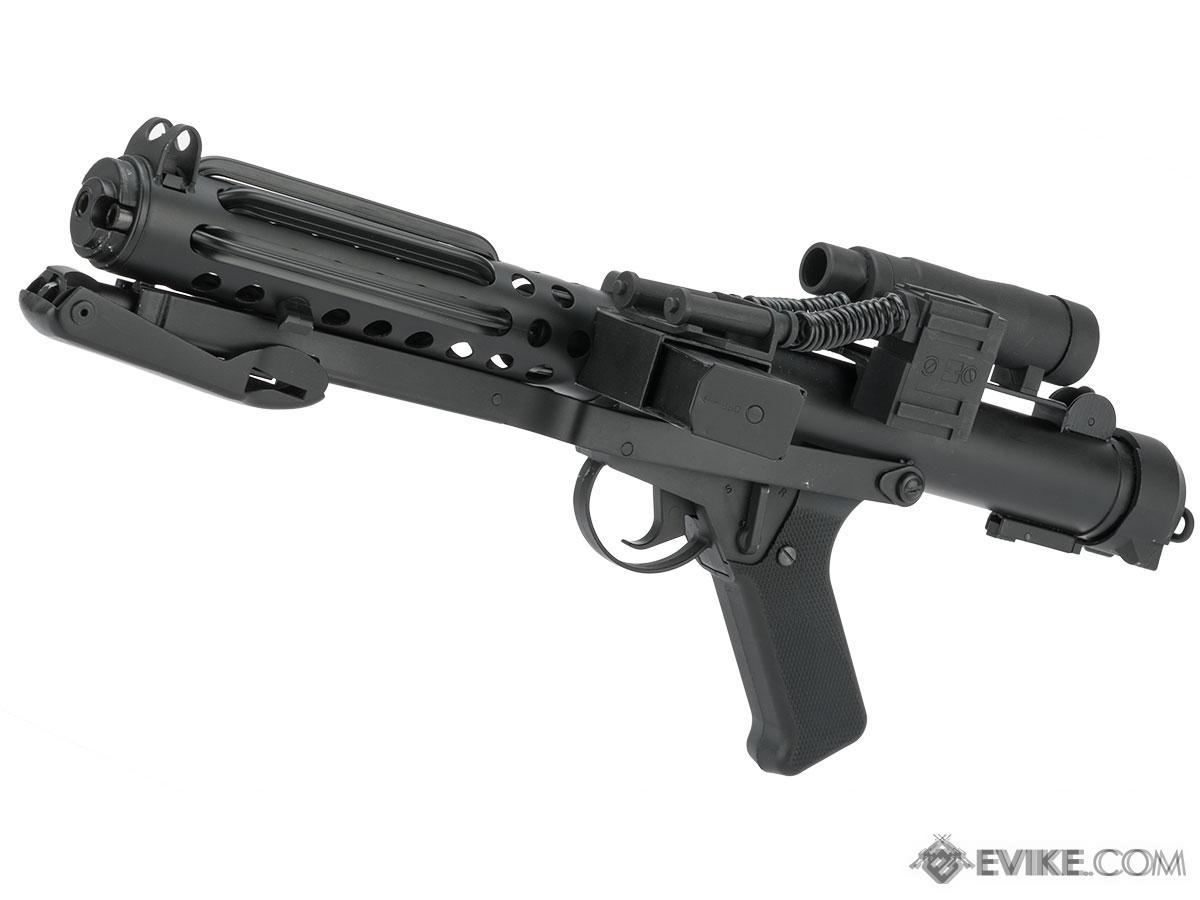 S&T is the only company that makes a Sterling airsoft replica. They also made a “blaster” variant. It’s not ‘Screen Accurate’ but if you don’t want to go through the hassle of building the blaster and are ok with with having ‘close enough’ version, this is an option for you. It should be noted that this one comes with the correct shortened magazine in the box.

The E-11s used in Return of The Jedi (as well as in Battlefront II) were slightly different than those used in ANH/ESB/R1/Solo. The base weapon is from a model kit based on the Canadian Sterling variant (C-1) the only structural change seems to be the design of the iron sights. Here are the differences:

Everything but the iron sights is doable with the S&T Sterling. If you have access to a 3d printer, you can check out this page on Thingverse. Download the files and print only that parts you need. Once printed you only need to securely attach the parts and you can be running around like the Inferno Squad Agent you’ve always wanted to be.

The A280 family of rifles seems to be the backbone of the Rebel Infantry. In the three movies where we see ‘boots on the ground’ troops they are predominantly armed with a variant of this blaster. Just like with the E-11, these were based on real world weapons with a bit of modifications.

My favorite part of Empire is the Assault on Echo Base. I mean, just look at the header image of this site, or heck, the name of our podcast. It’s the first time in the trilogy we see actual Rebel infantry and they are armed to the teeth, not that it mattered against the might of Imperial Walkers. The blaster rifle used in this film seems to be lightly modified WWII German assault rifle.

This might not be the best option as the on screen variant doesn’t have a magazine. It might be possible to modify and shorten the magazine, but you are going to run into the same issue the E-11 has; very low capacity.

Other than that, the only modifications would be to replace the wooden butt stock and and a singlepoint scope. I can’t find a resin kit for one that doesn’t include a resin cast of the blaster too unfortunately, but if you ask nicely you could probably get this guy to just sell you the scope out of this Rogue One blaster kit.

But if your interested you can pick up a replica HERE

For Jedi, the prop team used a different rifle for the base of the Rebel Battle Rifle. I think it had something to with not being able to import the STG-44 used for Empire. This could just be hearsay/rumor, but it makes sense to me. This version of the A280 modifies the base gun quite a bit but luckily, kits have been available for this build for awhile. The best part, most of these kits use airsoft guns as the base, which makes building a skirmishable one even easier!

The M16/M4 family has been the battle rifle of the U.S. for nearly 50 years. First Introduced during the Vietnam War, the M16 has gone through many design changes and is still in use by the armed forces to this day (though again, many design changes…we aren’t issuing out 50 year old guns ^_^).

As mentioned above, most of the resin prop kits that are available were made with airsoft replicas as the base. Though they look similar to the real steel versions, their dimensions are slightly off (by millimeters), so finding kits that are created to fit the replicas is awesome.

G&G M4 Carbine – Plastic body and more of a modern design. But it is cheap and reliable. I’ve owned 3 of these and always recommend them to people just starting airsoft.

CYMA M16A1 Vietnam – Probably a more accurate base for the A280.

Short Magazine – One great thing about the M16 based rifles; you can get near screen accurate magazines that actually hold useful amounts of bbs. These ones hold 190rnds.

A280 (Endor) Conversion kit – This is a pretty cool kit that comes with almost everything you need. You will still need to get some PVC pipe for the barrel. You will also need to remove one of the magazines so you can use the airsoft one. Also, small issue, I have no idea how to keep the functionality of ‘shooting bbs’ with this kit intact. I feel like it would be easy to figure out, but I don’t have this kit yet!

The Rebel Commandos in Rogue One also went to the A280 for the rebel battle rifle. Though this time, they changed up the body a little bit and made it look less like something pieced together in a garage last minute for a cosplay (I’m looking at you Jedi). The cool thing with this prop is that they took advantage of the M4s modularity (that’s a real word. Fight me). You can have a pistol, or a carbine, or a rifle, or even a sniper rifle.

As mentioned above, like the ROTJ blaster, was based on the AR-15/M-16. Not much else to say on this that hasn’t been said before. So on to the parts list!

G&G Combat Machine – Seriously a great starter airsoft gun. Lightweight and generally reliable (at least mine have been)

Both the kits below also have options to make just the pistol if you want.

A280-CFE Rifle parts kit – If you choose the ‘add-on’ package, you will get everything you need to build the rifle sans the “gun” part. This kit still needs the airsoft gun, obviously.

A280 Carbine Kits – This is kit like the above link, but with less parts. Perfect for making the shorter carbine variant or as a base for the ‘Sniper’ variant.

Short Magazine – One great thing about the M16 based rifles; you can get screen accurate magazines that actually hold useful amounts of bbs. These ones hold 190rnds. Yeah, I copy and pasted this from above.

For the shrouded sniper look, you will need to get a pvc pipe with a large enough diameter to create the barrel shroud. Look at the picture at the beginning of this post of me with the ShoreTrooper. The rifle I am carrying is based on the Nerf A280 (Sergeant Jyn Erso blaster/Cassian Andor Blaster), but the concept is the same for an airsoft variant.

And that’s pretty much it for now. I’m sure there are a few more deep dive guns I can dig up. There are a few off the top of my head, Jyn Erso’s pistol (based on a Luger)…DLT-19 (MG-34). But I think the above does a pretty good job of covering the main battle rifles and sidearms of teh Galactic Civil war. Creating a a new costuming group specifically for playing airsoft is an idea that has been floating around my head for awhile.  If you to are interested, Let me know! I can point you in all sorts of directions to get started.