*I’m using the same blaster as from the last post because I only bought one. I highly recommend that if you are starting this post with a fresh blaster, that you DO NOT paint it before hand. No point in painting this thing several times, am I right?*

Let’s get “Accurate” aka Cutting Blindly In The Goo

Ready for the next part of the journey? How much do you love being covered in plastic dust?

I hope the answer is “I like to be dusted with a fine coat of plastic, Jon.”

If you are just joining us and didn’t read the last post, fear not as you don’t really need any of the information there (with the exception of the excess plastic seam cleaning). In this part of the tutorial we are going to make some cuts, like, a lot of them. We are going to remove a ton of plastic. We will also add some parts to the inside of the blaster too.

What You Will Need: 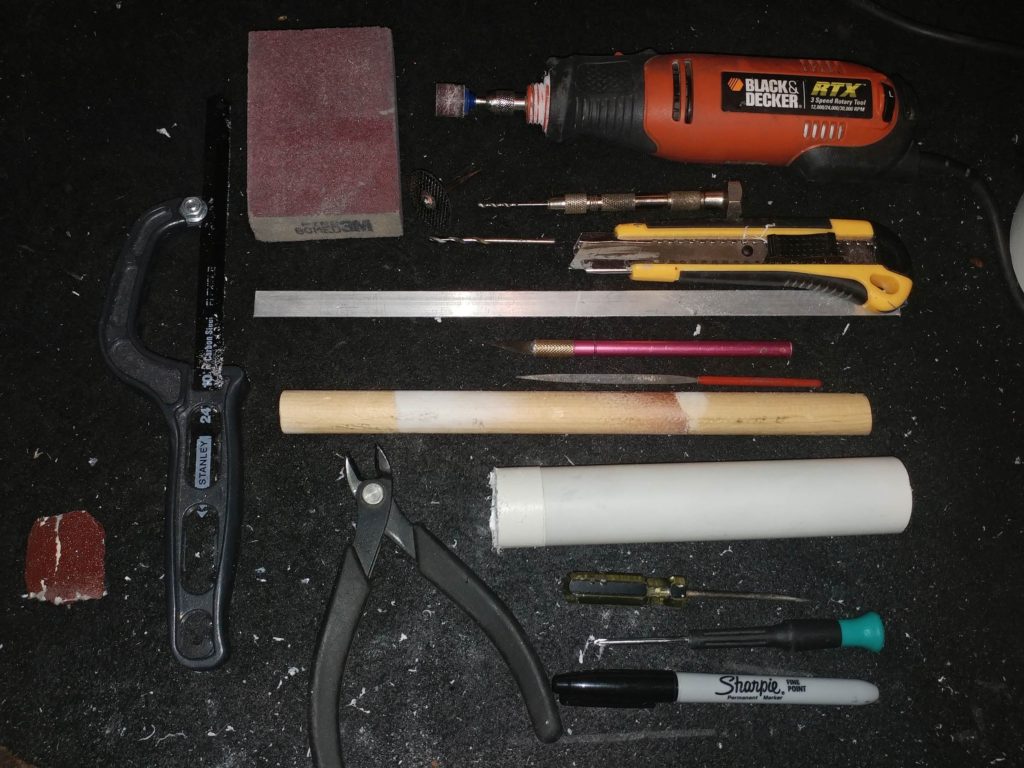 Knowing me, I will probably be adding stuff to this list as I build. I will mark those in red for my own amusement. (I FORGOT GLUE. Come on Jon, get it together.)

In the last post I mentioned that there tends to be some excess plastic along the seams of the blaster. You can do a quick clean up here and a more thorough cleaning/sanding after we take the sucker apart.

This is the least fun part of the build in my opinion. Separating the two halves is not an easy task.

No cool tricks here, just remove the screws. most of the time you will end up with more holes than actual screws…

This part sucks. No doubt about it. For me it is the most stressful part of this whole process. The two shells are screwed together, but it doesn’t matter because they glued all of it down. To separate the pieces, I start at the business end of the barrel.

Place a screw driver or another sturdy item for prying, in the hole in the barrel. Slowly start to pry the parts apart. 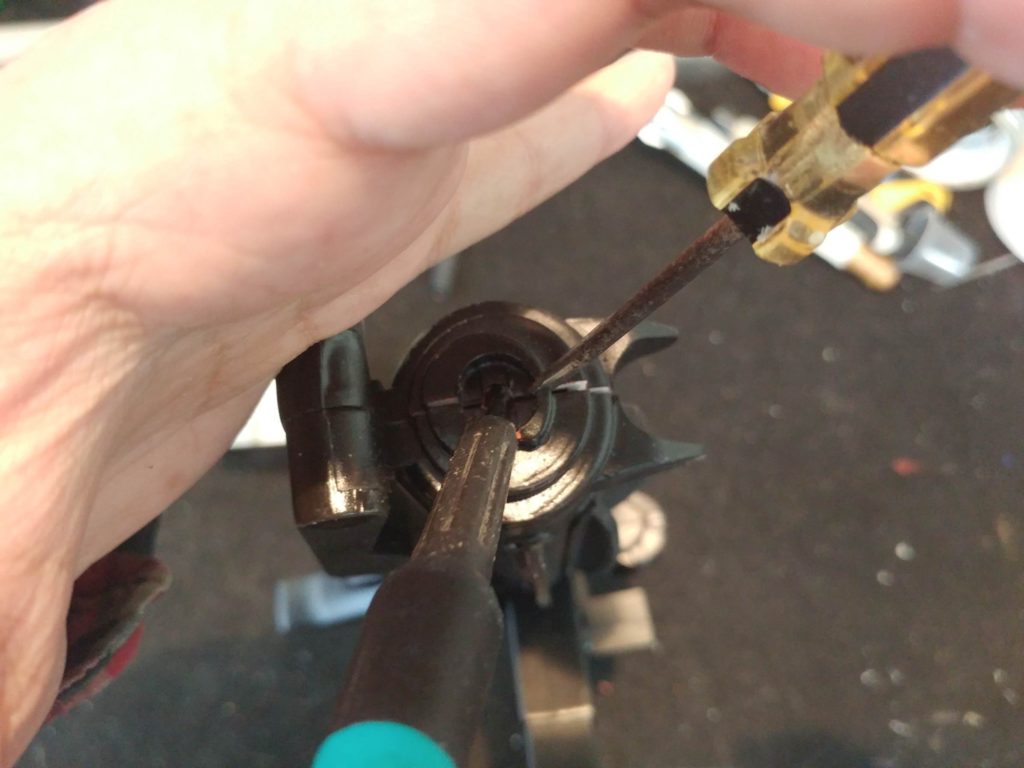 It may take awhile to do this and there are going to be several very loud SNAPS as the glue gives way. Take your time on this, you don’t want to go to fast and end up creating a crack that isn’t part of the existing seam!

With the halves separated go ahead and remove the screw posts on each side. I use model making clippers, but you probably could use the hobby knife or a rotary tool to remove them.

Sand down what’s left as smooth as you can!

I love using my Dremel to cut and grind things into smaller things.

Firstly, we need to cut out the holes on the side of the barrel. Begin with making small ‘pilot holes’ with a small drill bit. Slowly increase the diameter of the hole until you have removed the plastic up to the ‘rim’ of the vent holes. Using various Dremel bits here helps, angled grinding stones and the small sanding drum will work wonders

When the holes are cut out, use your hobby knife to clean up any melted plastic build up and then sand and smooth the holes on the outside and inside to remove any more debris.

We need to now cut out the slot on the body that the Real Steel counterparts charging handle would go (the part that makes the gun ready to shoot). This slot is just behind the ejection port and goes most of the length of the rear of the blaster.

You can also use this time to cut out the plastic in the ‘ejection port’ (see below). Alternatively, you can skip cutting it out and paint the area silver and follow later instructions regarding the ejection port.

The charging slot is about 1/2cm (5mm) wide. The top of the slot is even to the top of the ejection port and runs down the body to front of the circle on the rear site (see above, middle picture, in green).

Sand down the edges as you should be familiar with now!

Step 5: Bolt Up…Or something about the Chargers? running out of witty things for titles.

*if you didn’t cut out the ejection port, skip this step*

The way I did this isn’t the way I did this on past models, but I wanted to try something new and slightly more realistic. In this section we are gonna make a faux bolt, well at least half of one. 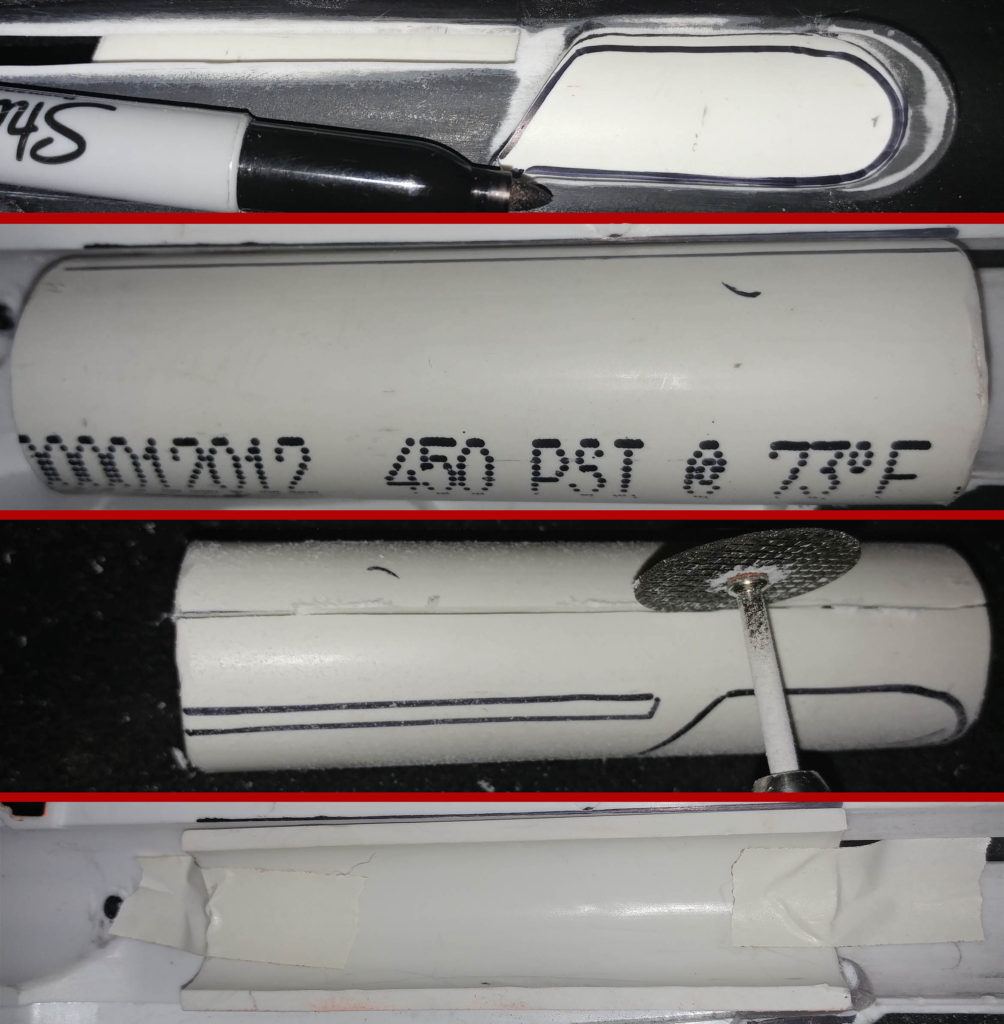 Step 5: I didn’t want to do the pvc pipe thing edition

I don’t have pictures of this so please use your imagination. You’re Welcome.

Now we need to clean up the actual scope.

Let’s start with with removing the ‘negative space’ plastic bellow the scope as well as removing what’s left of the mounting rail. 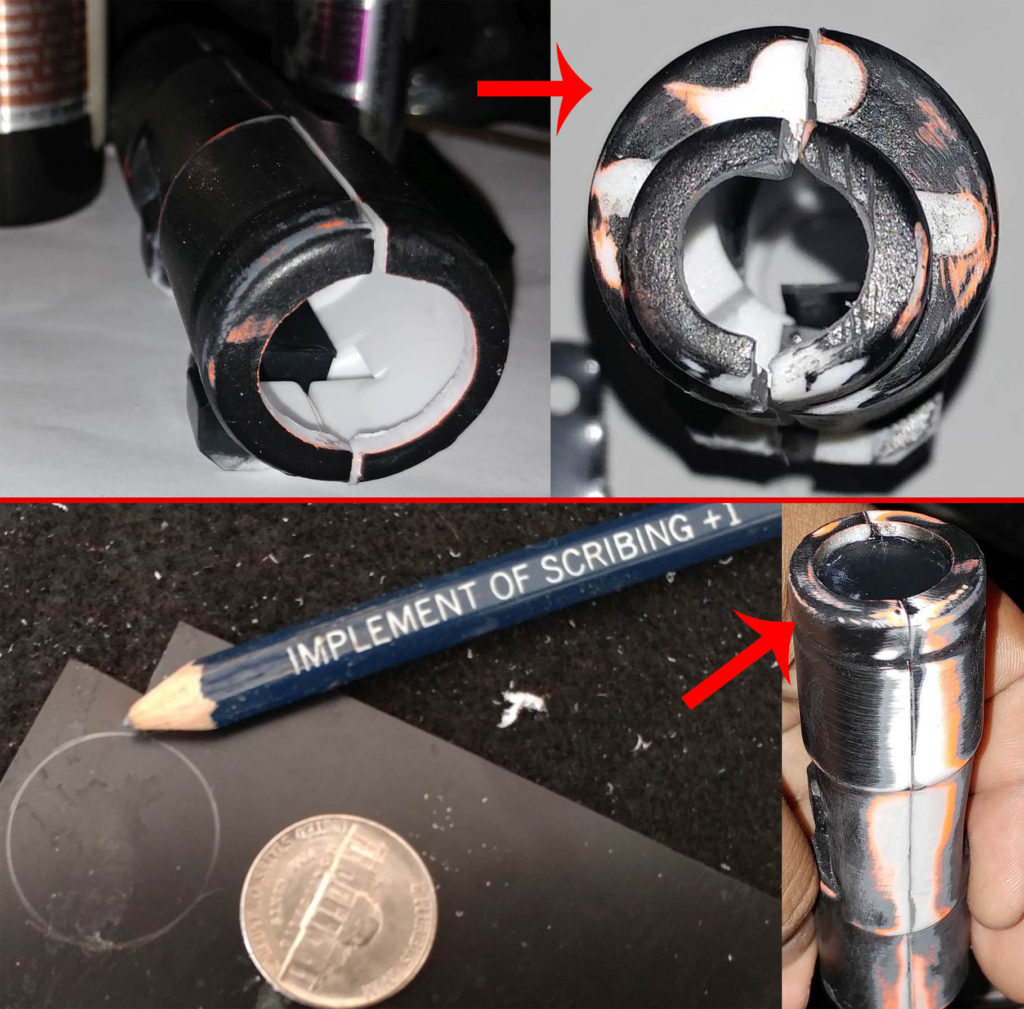 Since we irrevocably destroyed the scopes original mount, we need to make a new one. And just for fun, let’s make it the way the original prop makers did this, shall we?

Since we are removing chunks of this thing, why don’t we continue that pattern of behavior? You see that mag well sticking off the side of your blaster? Look close, I’ve purchased one of these where mag well unit was glued in at an angle and that’s no good.

We need to remove the whole unit so we can do some customizing work on it (in the next post). Removing it is pretty easy. We then will cut off the “magazine”. We will make a better one in the next post. 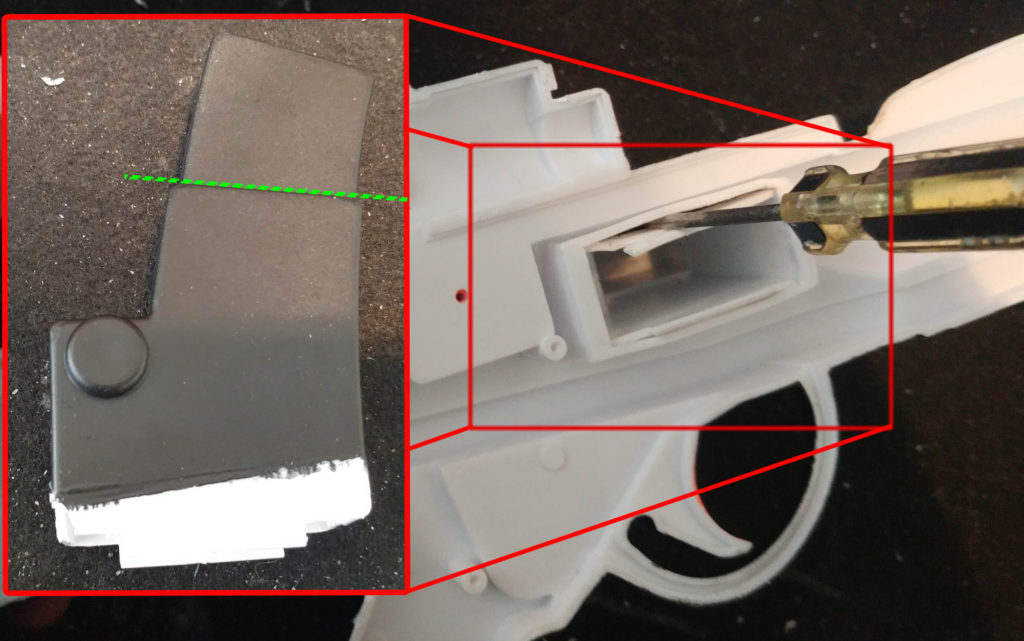 The fins (T-Tracks) on the front are the biggest give away that this blaster isn’t a ‘proper’ prop (see what I did there?). They are too large and too curved, but, we can fix that. With all the cutting I’ve had you do in this tutorial you should be a pro now.

Each of the fins is a slightly different size on the toy. We need to cut/shave them down to a uniform size. I’ve found that a having a maximum height of around 1/4 inch from the base of the fin (not to the body of the blaster but starting where shaft of the ‘T’ forms) seems to work. I wouldn’t worry about getting the fins completely even and focus more on getting rid of the ‘Hump’ in the center of 5 fins. 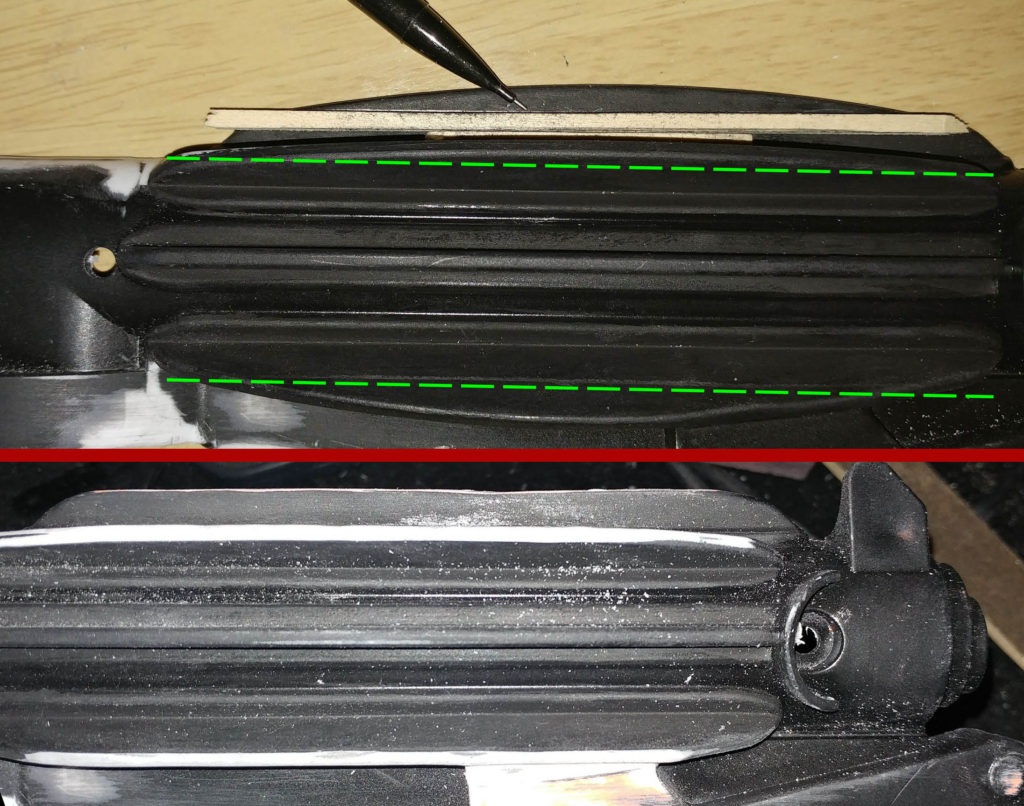 That’s it for today. All the cutting is now done. That is, unless I spaced out and forgot a bit, which I will add to the next post.

A few more things to glue inside and out!

Gluing it all back together.

And much, much, more. Because I know I forgot something.